The ability to perceive our spatial surroundings is critical to tasks ranging from grasping nearby objects to complex navigation through an unfamiliar environment. Our group examines visual perception and spatial cognition with a multidisciplinary approach involving psychology and computer science in the service of both basic and applied research goals.

We aim to understand the information and processes used in spatial behavior, with an emphasis on the computational analysis of visual cues for distance, the influence of representations of the self in perception of space, and the role of body-movement on spatial navigation. Many of these same issues are important to our applied work as well. This includes investigations of how to increase the effectiveness of computer graphics in conveying information about the three-dimensional world, investigating perception under low-vision conditions to aid in the creation of visually accessible environments for the visually impaired, and applying models of arousal and perception to clinical populations.

A significant portion of our work involves immersive virtual environments, both to understand perceptual performance in these devices and to use them as a tool to approach basic research questions in perception and action. 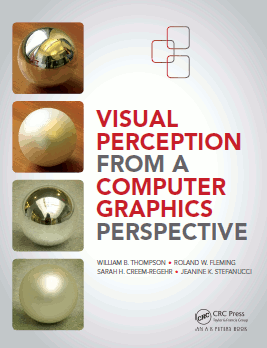 This work provides an introduction to human visual perception suitable for readers studying or working in the fields of computer graphics and visualization, cognitive science, and visual neuroscience. It focuses on how computer graphics images are generated, rather than solely on the organization of the visual system itself; therefore, the text provides a more direct tie between image generation and the resulting perceptual phenomena. It covers such topics as the perception of material properties, illumination, the perception of pictorial space, image statistics, perception and action, and spatial cognition.